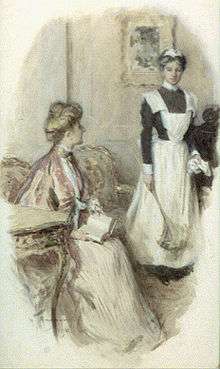 A maid, or housemaid or maidservant, is a female person employed in domestic service. Although now usually found only in the most wealthy of households, in the Victorian era domestic service was the second largest category of employment in England and Wales, after agricultural work.

Once part of an elaborate hierarchy in great houses, today a single maid may be the only domestic worker that upper and even middle-income households can afford, as was historically the case for many households. In the contemporary Western world, comparatively few households can afford live-in domestic help, usually compromising on periodic cleaners. In less developed nations, very large differences in the income of urban and rural households and between different socio-economic classes, fewer educated women and limited opportunities for working women ensures a labour source for domestic work.

Maids perform typical domestic chores such as cooking, ironing, washing, cleaning the house, grocery shopping, walking the family dog, and taking care of children. In many places in some poor countries, maids often take on the role of a nurse in taking care of the elderly and people with disabilities. Many maids are required by their employers to wear a uniform.

A maid is a female employed in domestic service.

Maid, MAID or Maids may also refer to:

Maid is a title granted to the eldest daughter of a Laird. The title is not often used today but can still be used. The title is customary and not automatically given.

The eldest daughter of a Laird is entitled to place the title at the end of her name along with the Lairdship therefore becoming "Miss [Firstname] [Lastname], Maid of [Lairdship]." Only placing the word "Maid" at the end of the name is incorrect as the Lairdship must be included.

As the title is customary and not automatic, it means that the eldest daughter can choose if they wish to take on this title, if they choose not to they are simply addressed as "Miss [Firstname] [Lastname] of [Lairdship]"